By Siddharth Vodnala, Voiland College of Engineering and Architecture 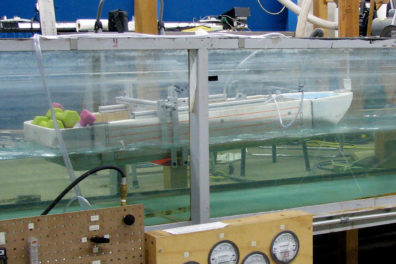 Take a look at dolphins as they gracefully glide near the water’s surface. They adjust their bodies to catch waves and conserve their energy.

Konstantin Matveev, a professor in the School of Mechanical and Materials Engineering, is using ideas from these natural marvels as he works to solve energy efficiency challenges of ocean‑going ships.

Like the dolphins, the ships that Matveev is designing would adapt to variable sea conditions and cargo loading.

“We are mimicking nature by creating underwater hull surfaces that change their shape and properties to increase efficiency of movement and save fuel,” he said.

One of Matveev’s designs involves pumping air under the ship’s hull to reduce friction. The air pockets can reduce drag by 15 to 25 percent, allowing the ship to reach higher speeds and decrease fuel consumption.

“We all know that dragging something through water takes more effort than pushing it through air,” he said.

While the idea sounds simple, the researchers also have to solve a daunting challenge in making sure that the ship remains stable at sea. Matveev is performing computer simulations and testing a variety of technologies to improve efficiency and maintain stability — from hydrofoils, which lift the ship above the water, to shape-shifting hulls that automatically adjust their shape to achieve maximum efficiency.

He has recently published an article on his computer simulations in the journal Ocean Engineering.

The researcher’s next plan is to conduct physical experiments with experimental boat designs at the Albrook Hydraulics lab on the WSU campus and, eventually, on the Snake River.

This work is funded for a period of three years with a $300,000 grant from the National Science Foundation.